Currently, Canis lupus species is the most widely distributed canid in the world. There are various subspecies distributed throughout North America, Europe, Asia, and Oceania. Depending on the subspecies, they vary in terms of coat coloration and size. In particular, the Mexican Wolf ( Canis lupus baileyi ) is one of the smallest subspecies of the gray wolf that exists in North America, the shape and size are similar to that of a medium-sized dog, reaching about 120 to 180 cm in length from muzzle to the tail, the male being slightly larger than the female.

Mexican Wolf generally about 5 feet high and weigh between 50 and 80 pounds. Her hair is bulky gray and rust-colored, often with distinctive facial patterns. They have large heads with thick snouts, bushy tails, oversized legs, and long legs. Wolves are known for their keen sense of smell, excellent hearing, and binocular vision. Mexican Wolf is the smallest of all the gray wolf subspecies in North America.

Early accounts of the distribution of the Mexican wolf included southeastern Arizona, southwestern New Mexico, sometimes western Texas, USA, and the Sierra Madre Occidental, Mexico. This past distribution is supported by ecological, morphological, and physiographic data. The areas described coinciding with the distribution of the Madrean pine-oak woodlands, a habitat that supports Coues’ white-tailed deer (Odocoileus virginianus couesi) that is the Mexican wolf’s main prey. In 2017, there are at least 143 Mexican wolves living wild in Mexico, Arizona, and New Mexico. There are 240 in captive breeding programs in the USA and Mexico.

Mexican Wolf lives in small packs generally made up of five to six individuals. They are composed of the “Alpha” male and female and the young wolves of the year. The Mexican Wolf marks its territory with its feces and urine. Like his Canidae cousins, he communicates by vocalizations and gestures. The life of the group wolves is governed by the dominant-dominated principle.

Wolves do not migrate seasonally, except in areas where prey animals migrate to lower winter areas and wolves follow them (for example, when the elk in the Apache National Forest migrates to the Apache San Carlos reserve). In most of the current territories home to the Mexican Wolf, this is not the case. Regular trips through extensions of home territory are a constant for wolves. Males and females disperse to establish new territories or reclaim lost habitat and can travel hundreds of miles; While the Territory sizes are a function of prey density.

The Mexican gray wolf has nocturnal habits and like others of its species, it is organized in packs of five or more members, among which it chooses a unique pair, called an alpha pair. With it, it reproduces for life, raising between 4 and 9 puppies per year, achieved in a single birth, generally between April and May. They mate in February and their pregnancy lasts from 60 to 63 days.

The alpha couple dominates the other members of the pack and protects their cubs in a special way until they are three months old when they are mature enough to leave the burrow and start hunting on their own. This wolf lives between 8 and 13 years in the wild, and two or three more years in captivity.

The Mexican wolf communicates from miles away through its howls and the smells it emits thanks to the glands that exist in various parts of its body, including its tail. But in the vicinity, they speak their gestures, the way of standing, and the vocalizations similar to those of domesticated dogs. His senses of smell and hearing are highly developed.

At developmental stages, Mexican Wolves Puppies nurse little from the mother and begin to eat food regurgitated by the parents, especially the mother. Four weeks after birth, the teeth have fully emerged and they begin to choose small pieces of meat, although the parents still regurgitate food. The change in diet from milk, semi-solid (regurgitated) foods, and solid foods (pieces of meat) is closely related to the appearance and development of teeth. This information has been derived from a study on captive individuals of Mexican wolves

The mother breastfeeds them at regular five-hour intervals. During the first two weeks, they do not emerge from the burrow, they defecate there and the mother is in charge of removing the solid excrement, while the father remains a few meters from the entrance. Between the fifteen and eighteen days, the cubs open their eyes, at this time they are able to stand up and walk inside the burrow, despite this they do not leave.

Mexican Wolf Puppies born blind and deaf after a gestation period of approximately sixty-five days, generally born at night. The wolf cubs are born with a round head and proportionally larger with respect to the body, which makes them look flat; with small ears and with the corners of the lips clear.

The Mexican wolf is a typical predatory carnivore. It is believed to have fed on a long list of prey in the wild, including white-tailed deer ( Odocoileus virginianus ) , mule deer or mule deer ( Odocoileus hemionus ), American antelopes ( Antilocapra americana ), collared peccary ( Pecari tajacu ), bighorn sheep ( Ovis canadensis ) , wild turkeys ( Meleagris gallopavo ), rabbits, hares, rodents and, from the establishment of farms, domestic cattle. Apparently he showed a preference for white-tailed deer and mule deer. and sometimes attacked some Cattle herds

Why is the Mexican wolf in danger of extinction?

The Mexican wolf was declared as endangered in the late 1970s and at that time it was estimated that its population was very small, with just fifty individuals. Today this species is protected, rehabilitated, and preserved in northern Mexico and the southern United States.

The reduction of their prey, such as deer, caused wolves to start attacking livestock, leading to their hunting, as well as the trapping and poisoning of animals and the use of pesticides (such as sodium monofluoroacetate), what produced its decrease. This led to the fact that in the 1950s the Mexican Wolf was eliminated in the wild and later declared a threatened species in 1976, a state that remains today.

Because wolves preyed on livestock, the economic loss of ranchers was the most important argument for eradicating them. Today, there is still a strong attitude of rejection by them for the reintroduction of wolves, and that is why environmental education and species management programs are very important, as well as the establishment of livestock insurance for predation.

Currently, the main threat to the Mexican Wolf is the loss of its habitat (temperate forests and grasslands), since hundreds of hectares of temperate forests are deforested and fragmented annually in the area of ​​distribution due to agricultural activities.

Threats to the Mexican wolf

The Mexican Wolf is one of the subspecies are in danger of extinction. There was only 50 Mexican Wolf left in the wild in 1981 as all specimens from the United States had been slaughtered. Nowadays, there are around 300 Mexican wolves in various breeding centers and in some zoos which vainly try to reintroduce them in their original habitat, but the authorizations are granted on a dropper basis. A request to drop some specimens on the land occupied by the White Sands base has been rejected by the United States Department of Defense. A reintroduction of three females and three cubs took place in 2007 in central Arizona. This population now numbers around sixty individuals.

Mexican Wolf going back to the wild

As reported by the British newspaper “Daily Mail”, the increase in the numbers of Mexican gray wolf goes back to 19 wolves who successfully born a total of 90 throughout the year, of whom 52 survived.

The presence of wolves is limited to the American Southwest, where 87 live in New Mexico and 76 in Arizona, and another 30 wolf lives in northern Mexico.

“The count shows we have more wolves, more breeding pairs and more pups born in the wild than ever before,” said Amy Lueders, Regional Director for the U.S. Fish and Wildlife Service in Albuquerque, NM. “This is the second year we have seen a significant increase in the wild population of Mexican wolves, a success that is directly tied to the science-based, on-the-ground management efforts of the Interagency Field Team.”

“This is the second year in which we have witnessed a significant increase in the numbers of wild animals from Mexican wolves, a success directly linked to the efforts of the science-based field management of an inter-agency field team,” she added.

“This increase represents countless moments of wolf awakening and intelligence, and is a large part of keeping their young alive,” Michael Robinson of the Center for Biological Diversity said in a statement.

“It is encouraging to have more wolves in our forests, but federal officials need to take stronger measures to create healthy genetic diversity,” he added.

In an attempt to further increase the numbers of endangered animals, the Fish and Wildlife Service has raised wolves in captivity and released puppies into the wild, and this will increase the genetic diversity of the species and give them a better chance of long-term survival.and in this way we will see gray wolf recovery in many states. 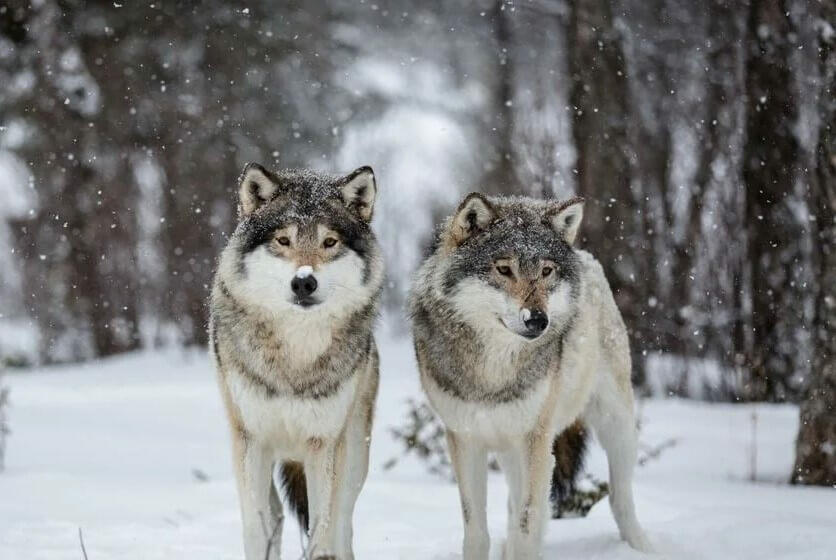